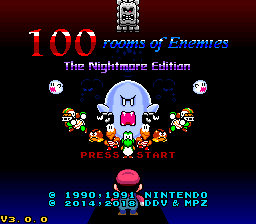 100 Rooms of Enemies is a Pit of 100 Trials inspired SMW Romhack started by Daizo Dee Von where the goal is to get as far as you can to win by defeating every enemy in each room. The reason for it's existence is it was a hack that challenged the mindset that games without the ability to save progress are never fun, first argued during the original Touhou Mario by Wakana. It initially released in 2014 with v1.0.0. during Winter C3, and was rejected for the Fryguy boss clipping through walls, thus making the game unbeatable. MellonPizza joined development to fix the bugs found in v1.0.0. and so Daizo released the new v2.0.0. of 100 Rooms of Enemies in Summer 2015, and was since accepted. Ever since it's explosion in popularity in August 10th 2017 thanks to an upload by Blue Television Games, both Daizo and Mellon worked together to start work on "The Full Edition", later changed to "The Nightmare Edition" for it's inclusion of Nightmare Mode and it's many improvements and features. This update is still being worked on to this day. 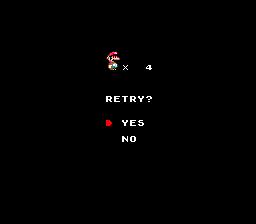 v2.0.0. brought forth two versions of the game: Arcade Mode, and Do or Die Mode. It also fixes a few things that were brought in v1.0.0. which includes rooms with "bad palettes" changed to have custom palettes instead; the Fryguy boss being "almost" fixed, and Room 100's self lock being fixed.

Arcade Mode allows the player to have 5 credits to start, and each death brings you to the room you died in. Lose all of your lives, and you restart back from the title screen. This mode also brings in the ability to gain lives by finding hidden 1-up blocks that are scattered throughout all 100 rooms.

Do or Die Mode

Do or Die Mode is what it says in the tin: you have one chance to clear all 100 Rooms. You die, and you're sent back to the title screen to retry. You also cannot gain any lives, as the life count is stuck to 1 even if you bounce on enough enemies or collect enough coins to gain a life. This mode was first completed by levelengine save stateless.

Demo in Arcade Mode in "The Nightmare Edition"

There are many features that make The Nightmare Edition special. One such feature is instead of a seperate rom for each mode, both Arcade and Do or Die are packaged together in a single ROM along with the new Nightmare Mode. Along with this, many playable characters have been added as unlockables for completing the modes. On top of it all, it also tweaks old rooms and fixes cutoff established in all of them.

Along with everything established, there will also be a new feature added that allows you to skip rooms by finding "Special Rooms" found by completely specific rooms in a special way. There are 10 of these special rooms, all with various styles and ideas.

Do or Die Mode

Do or Die returns with everything established, but now it has a stopwatch for those who speedrun the game from beginning to end.

The new mode of the game, where the player is tasked with completing each room with 5 credits again. This time, all the rooms have been "remixed" into harder versions of the originals to provide a much harder challenge.

The Characters (So Far)

The biggest standout feature of 100 Rooms of Enemies: The Nightmare Edition is it's playable roster filled with established Mario characters alongside some special guests that have joined the roster thanks to the efforts of it's respective creators.

The default character of 100 Rooms of Enemies who has no changes to his move set in the latest version. An interesting fun fact is Mario's original code from SMW was removed in favor of a disassembled version of his characteristics. The reason it was done was so development for the other characters was made easier since code is shared between all the cast.

Confirmed to be unlocked through completing any mode, Luigi comes with his staple physics established in many Mario games. More specifically, his higher jump and slippery traction.

First revealed in the raocow's talkhaus thread of 100 Rooms of Enemies: The Nightmare Edition, Demo originates from raocow's romhack "What The Hell", but her design was taken from the talkhaus collab "A Super Mario Thing". She acts as a skin to Mario, but contains a unique soundtrack that comes from ASMT and other games raocow has played. There might be a chance Daizo Dee Von chatted with Wyatt about possibly using songs from "A Second Mario Thing", but he hasn't confirmed or deny the songs appearing at all in a recent post.

Various Wyatt tracks are confirmed to appear as well. It's unclear which ones, however.

First hinted at in the Teaser Trailer of 100 Rooms, on Daizo's 300 Subscriber Milestone he has created a fakeout trailer of himself playing Sicari Remastered only to somehow find himself swapping games while still playing as K-16 somehow. He exclaims "What is going on here?!" with a Super Smash Brothers-esque reveal that K-16 is playable in 100 Rooms of Enemies with all her abilities in tact. K-16 comes with a health bar reminiscent of Super Metroid's, she can charge her shot when she gains fire power, can wall jump on walls, and cannot run nor spinjump on enemies. Both Daizo and Mellonpizza have admitted a number times that she is the most overpowered character in the roster so far, and that "you will really have to earn the right to play as her..."

As the last revealed character thus far, Wario has appeared in the very first trailer in Daizo Dee Von and Mellonpizza's "TEAM NIGHTMARE Direct" where Mario, Demo, and Luigi are playing a betting game. Luigi wins, but all the money flies up in the air as a shadowy figure dashes by. After the characters look upwards, Wario drops down from the ceiling and reveals himself, laughing at the characters as his name pops in. Wario's main move is his Wario Dash, an attack where the player holds a button to dash forward to take HP off enemies, killing them, or bouncing them in a stunned state. However, Wario has the lowest jump of the whole roster, requiring maximum speed to get onto the higher platforms.

The only glimpses of Waluigi were at the end of the "Gambly Night" trailer, and also maybe behind the tree when Mellonpizza mentions "Maybe someone stole [Luigi's] lucky shoes?". Otherwise, he doesn't seem to be completely confirmed to be playable. Daizo Dee Von has posted on twitter saying that all the characters including "maybe" Waluigi are playable, so either he is trolling about Waluigi's conclusion to reference the fact Waluigi isn't in Super Smash Brothers as a playable roster, or he is in fact confirming it and isn't ready to be presented to the public just yet. Who knows?

In December 2019, Daizo has decided to upload daily revealing a random song from the 100 Rooms of Enemies: The Nightmare Edition. It was unique by the fact most of the songs had a "char_ID" attached revealings songs pur character number. By this, we know that the IDs go from 0-7, with a "???" upload, which means there's a grand total of 9 characters (Unless "Original Tertium" is a character, which that makes it 10.) The only question is what characters go in each ID slot? It's confirmed that char_ID:0 is Mario, char_ID:2 is Demo with the A2MT tracks, char_ID:5 is Wario for the Wario related tracks, char_ID:6 might be K-16 because the tracks are shared with the Sicari Franchise, and char_ID:7 is a meme character of sorts because of the Siivagunner styled remixes.

Day 10: A Second Mario Thing - Where Does the Future Go? (Unused) composed by Wyatt for char_ID:2 (Demo).

Day 18: CUSTOM - Trying to be Epic composed by ThinkOneMoreTime for char_ID:5.

Day 23: Illusion of [Gaia/Time] - Longing for the Past (Memories Back) ported by Neidave for The Moon Vault.

Day 25: A Second Mario Thing - Trials of the Parrot (Early Version) composed by Wyatt for char_ID:2 (Demo, for Nightmare Mode)

Day 26: Live-A-Live - Nice Weather Ain't it! ported by tcdw for a potential score board?

Day 27: Pokémon Gold/Silver/Crystal - Dark Cave ported by Lui37 for char_ID:7 (for some sort of meme character?).

Day 29: Final Fantasy Legends II - Boss Battle ported by Gocha for char_ID:3. (interesting note: it used to be from the original soundtrack.)

One thing is definitely for sure with this advent calendar... the soundtrack is going to be huge. We know this isn't the last of it either because songs have appeared in both the Team Nightmare Directs and the 100 Rooms of Enemies updates, and that's not even including the original v2.0.0. 100 Rooms of Enemies soundtrack. If this advent calendar is [1 hour and 22 minutes total] just with those songs combined, then we might expect it to be over 2 hours long with over 70 songs. 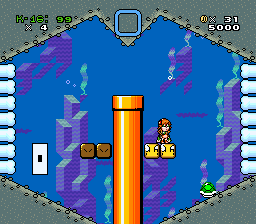 100 Rooms of Enemies was made at just the right time when people wanted a simple experience, and goes to show you don't need to be super "full of gimmicks" to be unique. Reception is also well received, baring comments about "Sonic music in a Mario Game" and "Bowser should be in Room 100 instead". A few fan sequels have been made, examples being 100 Rooms Oof Kek by Team Dicks and 10 Rooms of Enemies by Master Bluspark. Daizo Dee Von looks forward to seeing more by fans! It is also the second most downloaded ROM Hack made by Daizo, tho he thinks it'll reach to #1 fairly soon.

The first news that introduced the idea of multiple characters in 100 Rooms of Enemies was the official raocow talkhaus thread where Daizo occasionally makes progress on, and that was where Luigi and Demo were first revealed. It was later fully confirmed in a later C3 thread along with new info on what The Nightmare Edition brings. On February 14th of 2019, Daizo announced K-16's reveal in a video trailer in the style of Super Smash Brothers. On July 6th, Wario (and Waluigi?) has been revealed on Daizo and Mellonpizza's "TEAM NIGHTMARE Direct". No other news has sparked since...

As for when 100 Rooms of Enemies: The Nightmare Edition will be releasing? Time will tell...