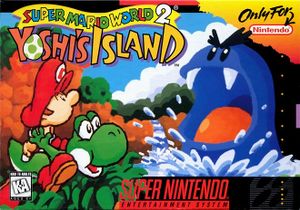 Super Mario World 2: Yoshi's Island (sometimes referred to simply as Yoshi's Island) is a 2D platform game for the Super Nintendo, developed by Nintendo EAD. The game is the prequel to Super Mario World and chronologically the first in the Mario franchise. The game is notable for introducing a time-based health system rather than hit points, an anomaly to what many platform games typically did in this game's time period. Rather than relying on powerful pre-rendered graphics as its contemporary, Donkey Kong Country did, Super Mario World 2: Yoshi's Island employs a very distinct, stylized arts and crafts style to stand on its own. The game makes use of the Super FX2 graphics chip (one of only four commercially-released SNES games to do so), which allows for larger, more detailed sprites and more advanced effects that emulate 3D space.

Golden Egg made by Romi is the main level editor of the game, therefore the basic and essential tool. Still in beta, it allows editing objects, sprites, header settings (tileset, music, etc.), palettes, screen exits and much more.

YI Entrance Editor is a pack of 2 tools made by Romi. The first one edits the start position of Yoshi in every level, while the second one edits the midway entrances (the position where you start after you collect a midway ring in-game), both features that Golden Egg lacks. The latter is currently deprecated by Raidenthequick's Better Middle Ring ASM patch.

Ycompress is a tool made by FuSoYa that decompress and dump most of the graphics in Yoshi's Island, so that they can be modified by a graphic editor. It can then be used to recompress and insert the graphics back into the ROM.

Yoshi's Island Level Tool is a tool made by FURiOUS that can be used to export and import level data and entrances from/to any rom (another lacking feature of Golden Egg). It can be also used to apply Asar's patches.

BTD6_maker's YI Text Editor (also known as BYTE) is is a text editor written in Python made by BTD6_maker, and it's used to edit various text in the game, such as level names and message boxes. The difference between this and Y.I.P.E.S. (a deprecated text editor) is that the latter may occasionally overwrite important data, which sometimes corrupt the level data.

Yoshi's Island Sprite Set Editor (also known as YI Sprite Set Editor or just Sprite Set Editor) is a tool made by Kipernal that lets you edit, as the name suggests, the set of sprites used by the game, allowing you to replace existing sets with new combinations of sprites. Even being a standard tool, it has some crashing bugs and it's tedious to use because their listing system is in decimal (instead of hexadecimal).

AddMusicY is a tool made by Jimmy which is used to insert custom music into a Yoshi's Island ROM. Due to the lack of flexibility of the YI ROM, this tool only replaces the existing songs, rather than adding new ones.

EggVine was the first editor for Yoshi's Island, and was made by Squash Monster (and later improved by Yoshis Fan). It was known for crashing a lot, and for lacking graphical display, but other than that the tool was decent and several hacks were finished by using this tool. It was obsoleted by Golden Egg.

Yoshi's Island Phrase Editing System, usually known as Y.I.P.E.S. (or just YIPES) was the first text editor for Yoshi's Island, made by Kipernal. The tool is very intuitive and has a good user interface with graphical display, but at the same time it isn't safe to use, because it may ocasionally overwrite level data. It was obsoleted by BTD6_maker's YI Text Editor.

Yoshi's Island Title Screen Editor (or just Title Screen Editor) is a tool made by Kipernal, which lets you edit the title screen island sprites. It's a very buggy tool (it crashes a lot and most of the time it doesn't work) and it has no practical use.

Pastel is a beta tool written in Python 2.7 by Lui37, that can be used to edit the palette sets in the game. Despite being useful, it has at least one crashing bug that corrupts the rom, and one that crashes the tool.

Yoshi's Island Overworld Editor (or just Overworld Editor) is a beta tool made by tehaxor69 which lets you edit the tilemaps and sprites of the overworld (the level selection screen, specifically). Despite the tilemap editing works, the tool is unfinished and unpolished so it's hard to use (bad user interface and functions and lack of core features).

Golden EggVine is a unfinished level editor, started by Yoshis Fan and default0. It's presumable it was going to be a kind of blend of Golden Egg and EggVine.

The Super Nintendo Entertainment System has 128kb of system RAM (aka WRAM) that every game can access, spanning from $7E0000~$7FFFFF. This map explains what each address represents in Yoshi's Island mostly in standard gameplay gamemode $0F. In Yoshi's Island in particular, since it has the Super FX enhancement chip, much of the game's memory is stored in cartridge RAM instead. This is why there is so much free WRAM in this game. Nonetheless, there are still some pretty important pieces of data stored here.

Yoshi's Island has 32KB of Save RAM, spanning from $700000~$707FFF. This map explains what each address represents in standard gameplay gamemode $0F. The reason so much important stuff is stored here is because the Super FX can only access cartridge RAM, not SNES system RAM. Note that other gamemodes may use these addresses for completely different purposes.