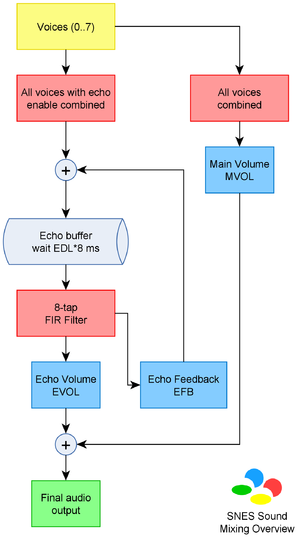 A FIR Filter (Finite impulse response filter) is a type of filter used on signal processing. It works by taking the sum of last Nth samples multiplied by a value, called FIR taps or coefficients. It's finite because if you pass a FIR filter in an impulse response, the impulse will fade out after passing though the N taps. That's easy to notice since the FIR filter never uses itself as feed unlike the IIR Filter.

On the SNES, the FIR filter has 8 taps which are 1.7 fixed point values. The filter is applied on the echo output so it has direct influence to the sound output and can be used to archive different effects which is more detailed on the following topics.

The FIR filter can be defined in the following mathematical formula:

For the current output sample Y[n], take the sum of previous N samples from source (including current), multiplied by the FIR coefficient, which is:

The SNES has eight FIR taps, which limits N to 8:

Which in other words, it yields to the equivalent pseudo-code:

Where FIR is a array containing the eight taps or coefficients.

Example of FIR filter used on Chrono Trigger, which is used as an echo low-pass filter on this case. Screenshot taken from SNES SPC700 PLAYER

The coefficients sum is done on a 16-bit integer type, which means that if an overflow occur the value gets clipped. The only exception for this is the last multiplication (last FIR coefficient multiplied by the first sample). For this case, the number gets clamped instead of clipped, e.g.: 18623 + 16888 will yield to 32767 instead of overflowing to -30025.

An accurate implementation of the FIR filter given the above rules would be:

The ">>" operator is the arithmetic right shift operation, which on this context is the equivalent by dividing the value by 128 (without decimal places).

Now we add the last tap which is multiplied by the current sample, x[n]:

So we finally take the last bit and we have our FIR value done:

Each sound channel (left and right) is processed separately.

Here is a diagram of the FIR filter calculation:

Because of the integer clipping behavior on the first seven taps, it's important to your FIR filter maximum gain never exceed 0 dB (or the absolute sum of all FIR taps never exceed 128) for avoiding audio clicks, specially with the first seven taps. Not all games obey that, so the most important is checking out the frequency response of the filter and verifying how the gain behaves for the frequency range.

The S-DSP generates one stereo sample every 32 SPC700 clocks. During these 32 clocks, some operations are done by the S-DSP regarding echo and FIR filter. These are the following:

Each time a new sample is generated on the S-DSP, one sample is taken from the echo buffer and inserted on the FIR ring buffer (x[]), which then the ring buffer is used to generate the FIR sample output:

The FIR taps are not read immediately, but gradually read while the left and right echo channel are being processed: 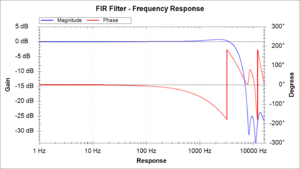 It's possible to view the frequency response of a FIR filter and therefore visualize which frequencies are amplified or attenuated. The calculations involves Discrete-time Fourier transform (DFFT) and are considerably complex. The formula looks like this:

Disregarding SNES clipping and clamping effects, the frequency response of its 8-tap FIR would be calculated as the following:

When doing a visualization, it's often common to see ripples or signal ringing on certain regions. Even with careful values choice, it's not possible to attenuate them because of the low amount of taps the SNES FIR filter has, but regardless of the amount of taps they are often common on modern DSP applications and other kind of filters.

The most useful thing that you can do with FIR filters is amplifying or attenuating a frequency range. Effectively, you can create your own sound equalizer depending on your echo settings and main volume combinations.

The most common usage involve:

For who wants to start experiment with FIR filters, the best recommendation is start experimenting with filters already made and available under the examples section. Normally the most effects you want to archive is making your echo sound more filled and the filters that will (likely) do that, depending on your echo, are either the low-pass or high-pass filters. They will either let the lower frequencies (bass) pass or the higher frequencies (treble), balancing the amount of frequencies your song has.

Choose a filter that has a gain between 0.00 dB and -3.00 dB, which are safe filters that will not cause audio clipping/overflowing. Filters with positive gain are not recommended specially since during the internal FIR calculations some samples may end up overflowing and generating audio clicks. Another common problem is the combination of excessive Echo feedback that combined with FIR filter can make the echo buffer gradually get louder and eventually "exploding" your song.

Filters with low gain (-7.00 dB and below) will make your overall echo weakier and less notable, which will require you compensating it by increasing echo feedback and echo volume, but at the same time the song quality can slight reduce because a few bits will be lost during the calculation and won't be recovered since all calculations are fixed-point.

The Nintendo SPC driver (N-SPC) includes four standard FIR filters which can be used on your songs. These are: 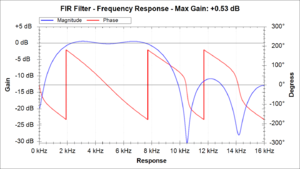 Analysis of N-SPC's built-in band-pass filter. It's notable that frequencies after 10 kHz has some ripples that still makes them slight audible.

The identity filter. Used if you want to keep your echo sound the same as original, disregarding the echo feedback of course.

High-pass filter with cut-off frequency at 3 kHz. In other words, frequencies higher than 3 kHz are kept while frequencies lower than 3 kHz are attenuated. The FIR gain is +0.91 dB, which means the FIR will increase the echo volume and although it's a small amount you should be careful when playing loud channels.

Low-pass filter with cut-off frequency at 5 kHz. Frequencies higher than 5 kHz will be attenuated. The FIR gain is +0.65 dB.

Band-pass filter that theoretically cuts frequencies lower than 1.5 kHz and higher than 8.5 kHz, however it has some ripples that makes frequencies between 11 kHz ~ 13 kHz and 15 kHz ~ 16 kHz audible, as you can see on the figure. That's considered normal given the limitations of a FIR filter with 8 taps.

Band-pass filters attenuates signal outside an allowed frequency range. It has a parabolic-like curve.

Band-stop filters attenuates frequencies between a frequency region. It has a "U" like aspect.