The following tutorial will explain how to create sprites using Dyzen. This tutorial covers not just how to use the tool, but also general functions for the creation of regular, cluster, and extended sprites.

For this tutorial, it's assumed that the developer has previous knowledge of ASM like using basic commands, branching, and indexing. This tutorial is based more on how to construct the logic of a sprite.

Also, it should be noted that this tutorial can also serve for sprites which are not created with Dyzen, though the focus is ultimately based on those.

Creating a CFG/JSON with CFG Editor

A sprite is structured in the following manner:

A state machine is made up of 2 main parts, the states and the transitions between states. In these machines, only one state executes at a time, and it changes according to logical conditions implemented within each state.

This isn't a complete course on state machines, because this material can take semesters of study for deepening all the distinct dimensions. Nevertheless, we will use this concept for putting together the logic of our sprite.

With this scheme, the idea is to take the central routine called StateMachine, which will be used for calling the correct routine according to the state that's executing. To do this, we will need a table of sprites which we'll use for this purpose. It's highly recommended to use a misc table, so we don't need to find freeram that can end up being used by other resources. For this we have to look at the top of the code, in the marked zone with the comments:

We can add the variable:

Using one of the misc sprite tables that can be used for whatever purpose we want.

Soon we'll create a routine named "StateMachine" that executes a different routine, depending on the variable !State,x. This routine will be the following:

We can note that this routine uses a table named "States". In this table, we will put all the states that our sprite can have as it's running, being stopped, turning, dying, etc. It isn't necessary to put the name of the states "State0". Simply use the name that you think is most conventient. Now normally, it's recommended to number them because it serves to remember the value of the variable !State,x that's used to call each state.

For those that know some high level programming, this routine would be the equivalent of:

We will be able to place this routine in any sector under the routine "SpriteCode". Just try to be tidy, because in ASM it's very easy for the code to become a disaster. Once this routine is created, we'll call it in the zone of the routine "SpriteCode" which happens before the JSR AnimationRoutine. Nevertheless, if we try the sprite right now, it won't insert, because the labels haven't been created for each state.

For making each of the states, we'll follow this template:

What we can note, this template has 2 sections:

Something that we can note about this structure, is that from outside the state, we can call both the "StateStart" and "StartLoop" using the JSR StateX_StateStart and JSR StateX_StateLoop commands. Calling "StateStart" can be useful in certain circumstances, when we need to begin a state externally. This is common especially in dynamic sprites or flip animations. Now calling "StateLoop" is not so useful. We could rarely find a reason for calling this section externally unless we had another state that was almost identical but with a little variation.

Finally, there's a question, "How do I know the index of the animation used in this state?" This is answered by going to the section of the code where the ChangeAnimationFromStart routines are. There can find something like this:

Where the value loaded in A would be the index of the corresponding animation. In this example:

Transitions allow states to change from one to another under certain circumstances. Each state can change to a limited number of other states so that the sprite has the intended behavior. For example, if we had a sprite that simply moved from side to side without detecting ledges, we would need a machine like this: 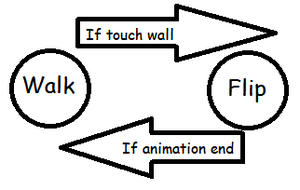 We would have a sprite that would walk in a straight line until it ran into a wall, then it would change to the flip state, playing that animation. When the flip animation finishes, then it would return to the walk state, going to the other side. And in ASM, that machine would look like this:

Let's analyze the code. First, we can note that it has 2 states as shown in the diagram. The first is Walk, with index 0, and the second is Flip, with index 1. Let's start by looking at the Walk0 state. This has the following condition in "StateStart".

This condition first checks the variable !GlobalFlip,x. This has the value 0 if the sprite faces right, or 1 if it faces left (It can be the other way around depending on how the sprite was made in Dyzen). Then, if the sprite faces right (!GlobalFlip,x is 0), then it loads a positive value in register A. Otherwise it loads a negative value in register A. Next it executes STA !SpriteXSpeed,x, which sets the speed of the sprite. Then refresh the sprite's screen position with JSL $01802A|!rom. Now in the "StateLoop" section, we can note the following check:

This will check the flags of the variable !SpriteBlockedStatus_ASB0UDLR,x, where:

We use the AND command so that all the flags which we don't need stay at 0. In this case, we are detecting walls, so we don't need the flags A, B, U, and D. So the value #$43 is used, which in binary would be #$01000011. So if the A register, after using the AND, is different from 0, then it is touching a wall. After this, It would change the value of !State,x so that it uses the Flip state.

It should be noted in this case that the routine JSL $01802A|!rom updates the value of !SpriteBlockedState_ASB0UDLR,x. This is why it's called at the beginning of "StateLoop" and not at the end.

Now we'll review the Flip state. The first thing to note is that it also updates the position of the sprite. An unsuspecting person might think that they don't need to update the position during the Flip routine, since the sprite shouldn't move when it's touching a wall. However, this is not true, and that's in case a sprite isn't touching the ground. Therefore, the vertical position must be updated.

The "StateStart" in this case is very simple. Merely set the horizontal speed to 0. The interesting thing in this state happens during "StateLoop". Here we can notice the following checks:

This checks the variable !AnimationFrameIndex,x. We can use this variable to know which frame within the animation is being played. Therefore, the idea would be to check if the frame that is played is the last frame of the animation. "How can we know what value to put in #$XX?" You can go to the table of that animation. In the animation routine, there is a table called "Frames". Example:

In this example, we can note that the animation for Flip has only 2 frames. Then the value that we would have to put is #$01 (size of the animation - 1).

Another method for knowing what number to put is to go to the table "AnimationLenght", which has the size for each animation. Example:

We can note that this table shows the size of each of the animation. In this case:

Once we understanding how this check works, we will go to the next one:

This is quite simple. It shows us that the variable !AnimationTimer,x contains the number of Game Loops (SNES Frames) before the frame will change. Therefore, if it has a value different from 0, it means that the frame is still playing.

After these 2 checks, we use these commands:

Finally, it goes back to the Walk state, but also the "StateStart" of the walk state is called. The reason for this is that when alternating the direction of the sprite, the sprite would show the animation flipped incorrectly for 1 frame. Therefore, in the flip states, it is very common to call "StateStart".

Here we can see the results of this behavior:

Dyzen has its own system of interaction. However, it's not mandatory to use it, so I will delve into the different ways of interacting between the sprite and other entites of the game such as the player, projectiles, other sprites, etc. In this section, we will also see certain actions that can be performed when a collision is detected.

To detect if the sprite interacts with the player, first we must select the Sprite Clipping that we want in the CFG editor. It will appear in the below square below: 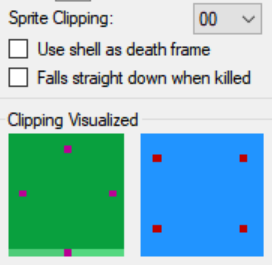 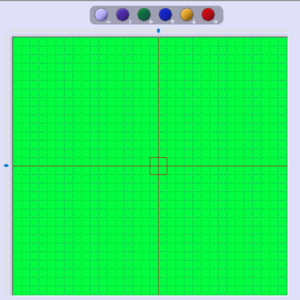 Therefore, when doing the sprite in Dyzen, you should consider this, to put the graphics in the correct position to fit with the Hitbox.

If your sprite has a common interaction, maybe you don't need to do anything in the ASM, as long as you keep the "Don't use default interaction with Mario" box blank. But if you need to do something out of the ordinary, you can use the following commands:

As we can see, first the player's hitbox is loaded, then that of the sprite, and then another routine is called to check if there is contact between them.

For a custom routine, it is practically the same as the vanilla routine. What changes is that you must load the hitbox of the sprite manually. For this we can use the following RAM addresses:

Therefore, the proper way to use to use it would be something like the following:

As we can see, it's the same routine, only this time we hand over the parameters manually instead of defining them in the CFG. Basically, the position of the hitbox is loaded (Hitbox Offset + Sprite Position), and the width and height are loaded.

Dyzen's system is a generalization of the custom interaction, only instead of specifying the parameters like before, it makes a loop which checks the different hitboxes according to a table. With this system, each hitbox has an action which is defined in the "Interaction" section of Dyzen: 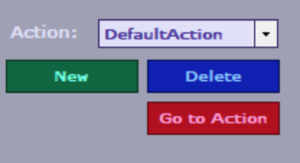 Then that action is called when there is contact between the respective hitbox and the player.

Tricks in the Graphics Routine

Tricks in the Animation Routine

Behaviors during Interaction with other Sprites

Creation of Cluster and Extended Sprites

Changes in the Animation