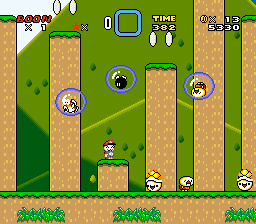 Screenshot of the level "Dodge the Enemies!" of VIP and Wall Mix

VIP and Wall Mix (also known as VIP and Wall and Alaska Mix, or just VIP or Mix) is a series of hacks made by japanese communities, mainly the several boards of the 2channel BBS, such as Newsoku@VIP (a shitposting board), the Kabe and Alaska hidden boards, and Game Urawaza and Kaizou (the game hacking board), mostly several anonymous people. The hacks are known for being the one of most famous japanese specimen in the hacking scene (among with Brutal Mario) during the 2000's period. There are already 5 finished released hacks, plus with a sixth one still in progress.

There are several aspects which makes this hacks unique, some of them are:

(*) For each hack there is an alternative version which uses all vanilla sprites.

Boon (also known as Naitou Horizon) is the main character of the VIP and Wall Mix series, and the only playable character in the hacks (as he's technically the ASCII replacement of Mario). His raison d'être is to always run, in the hopes that someday, he too will be able to fly high in the big blue skies. It can be implied that he has some kind of a relationship with Princess Tsundere, as he's the one who always goes to save her (just like Mario and Peach). He has the same moveset, frames and abilities than in the original SMW.

Tsundere is the always-kidnapped princess of the VIP and Wall Mix series (just like Peach in the original SMW and in the majority of its romhacks). She gets kidnapped at the start of every hack, one way or another. Her origin is to be a sort of pastiche of common Tsundere tropes, twindrills, "it's not like I love you"s and the like.

Yoshi (also known as Detteiu, localized as Horse) is a dinosaur-like character that acts as an ally of Boon and Tsundere in the series (just like Yoshi in the original SMW and in the majority of its romhacks). He has the same alternate forms and abilities than in the original SMW. It didn't receive a proper ASCII replacement, likely due to the difficulty of editing Yoshi's sprites as well as Yoshi being a meme in Japan, therefore its sprite is identical in both versions of the hacks. 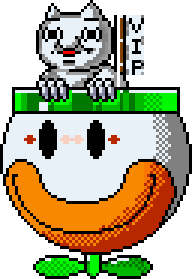 Daddy Cool is the main antagonist of the VIP and Wall Mix series. He's the ASCII replacement of Bowser. He's very good at mahjong, and can usually be seen in levels throwing riichi sticks to get in Boon's way.

The Koopalings are a seven-member clan of recurring enemies in the VIP and Wall MIX series, often seen as bosses in each world final castle. Individually, they are named Larry, Morton, Wendy, Iggy, Roy, Lemmy, and Ludwig. They are presumably Daddy Cool's minions (just like in the original SMW with Bowser). They didn't receive a proper ASCII replacement, likely to keep in the original spirit of Super Mario World, therefore their sprites are identical in both versions of the hacks. However, Lemmy does ride the poorly drawn monster Spoo in VIP2.

Big Boo is a recurrent boss in the VIP series, as well as for the majority of SMW Hacks. It's a giant boo that usually takes 3 hit to defeat. It got an ASCII replacement in VIP4.

The Reznor are a recurrent boss in the VIP series, as well as for the majority of SMW Hacks. They're usually in a group of four, spinning in their platform, which needs to be hit to defeat each of them. Its ASCII replacement is a puppy, known as Zonu, supposedly commonly used in FamilyMart chicken meat.

The anons of the 2channel Community

The Anonymous members of the 2ch community compose most of the hacks as most of the userbase in 2ch keeps anonymous when posting. In 2ch, the anons involve people from all walks of life, but in VIP it can be assumed to just be huge video game nerds.

757 (also known as boldowa or 6646) is a known porter and music contributor for the VIP series. He's known either in western and eastern communities.

Anikiti is a well known Japanese romhacker, his fame deriving from the Mario X World and Luigi's Adventure series of hacks. His stages focus more on strategic enemy placement and very "choconilla"-ish gameplay.

beyrevia is a little known VIPPER, infamous for doing the Absurd Athletic and Labyrinth Castle series of stages as well as the two DKC2 inspired stages, Stickerbrush Stickery (localized name) and Hornet Hole. His stages commonly focus in either impressive visuals or huge amounts of difficulty. Sometimes a bit too much. 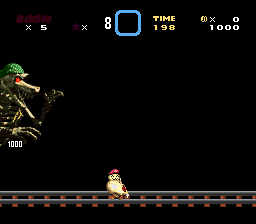 Target Terror, one of his VIP2 levels, based in a Donkey Kong Country 2 level

Initially as an anonymous collaborator, carol started to contribute to VIP hacks since its second release, where he contributed with 4 levels (which were re-used later in his personal hack, Brutal Mario) and the Spoo Lemmy, the Giko Bowser and Neo VIPdeath bosses.

For VIP3, he contributed the Banana Bird crystal minigame, the Mega Man 6 capsule room and the final bosses: Daddy Cool riding Gamma (from Mega Man 3) and Newsoku de Yaruo (based on Zero Two from Kirby 64), everything in the final castle of the hack.

For VIP4, he contributed the Yoshi chimera boss and the Seven AA boss (based on The Seven Heroes from Romancing SaGa 2, which he also did for his hack).

And finally, for VIP5 he contributed with 2 levels: Red Athletic (the Red Switch Palace) and Reznor Come Home (one of the stages in World 7). He also made the Tanasinn boss and worked on the coding for the Julius (from Final Fantasy Adventure) boss.

His stages tend to be more simple ASM showpieces, though he has been showing more effort in level design in the 2010s.

homing is an ASMer who normally stays in the background for most of the VIPs. Yet, he is still well known for making the Uber Homing and One Room Studio Castle stages, showcasing impressive ASM for the time and high levels of challenge. For VIP6 he also attempted to manage the hack and ported a song for the second Bowser's Castle stage.

SIG is a Japanese SMW hacker with more than 10 years of experience (2008 to present) and with a vast number of 38 hacks made. He is known for contributing only to VIP and Wall and Alaska Mix 5, but he could have contributed to others under anonymous. His levels are usually very vanilla with little to no ASM or non-traditional level design elements.

TSC is known for being the only non-anonymous person who's participated in every finished hack of the series.[citation needed] His levels are known for being very high in terms of difficulty, often times being difficulty spikes compared to the levels surrounding them. 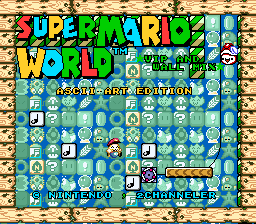 The first hack of the series. It's known for being largely vanilla and for introducing the level design style of the designers, but also for being the one with less memes/references. It's also the shortest hack in the series. 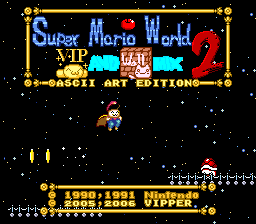 The second hack of the series. It's known for being (until now) the hardest hack of the bunch, introducing the ASCII sprites (which were backported for VIP1), but also for introducing a bit more ASM (such as, custom sprites from other Mario games like Hammer Brothers) and Graphics than its predecessor. It's also the first one where carol, the Brutal Mario's author participated (primairly as an anonymous). 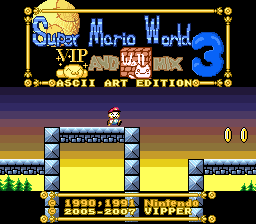 The third hack of the series. This hack is considered a turning point of them, since the polishment and features grew considerably in this one. It was the first hack in the SMW hacking history to have custom music on it.[citation needed], and it features a different type of overworld: after defeating the first world you can choose one of the following 4 worlds (Worlds 2 to 5) to continue your adventure, instead of following a linear progress (you needed to complete all of those 4 worlds to continue to World 6, though). The amount of custom resources were increased in this one, and some ASCII sprites were replaced. 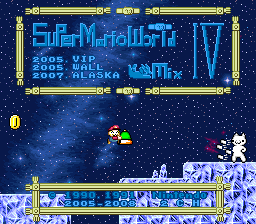 Title Screen of VIP and Wall and Alaska MIX 4

The fourth hack of the series. Everything seen in the first three hacks, but quadrupled: it features more ASM, more custom music and a more polished level design overall compared to their predecessors. One of the most iconic aspects of this hack is that you need to necessarily beat some of the special levels in order to reach the final levels and boss, and also for being the first one to have the VIP Coin indicator in the overworld border (right next to the level name). 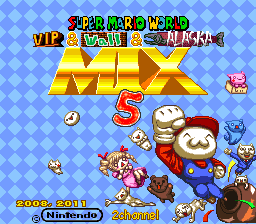 Title Screen of VIP and Wall and Alaska MIX 5 (AAE)

The fifth hack of the series. It's known for being, by the vast majority of VIP fans, the best hack of the bunch. It's the first hack in the series to include "sampled" custom music, exclusive title screens for both ASCII Art and Mario/Normal editions, and exclusive realistic overworld graphics in the ASCII Art Edition. 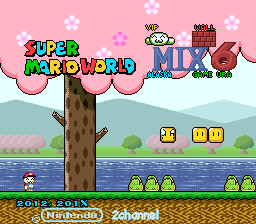 Title Screen of VIP and Wall and Alaska MIX 6

The sixth hack of the series. Still in development, this hack continues following the quality trail seen since VIP4: ASM, custom music and unique level ideas. It's known for being the hack with the longest development time (2012 to present) without an official release, but also for featuring an interesting multi-path overworld and for being the first hack in which western people have worked in.

Talkhaus' "Hack Fix/Translation Team" (THFTT) started doing translations of all VIP hacks (including the ones which already had one) in October 2018, in a attempt to have all five (finished) hacks completely translated and able to play in accurate emulators. Up to the date, all of them are finished and you can download them in the official thread at talkhaus.

Some of the games were translated by Horikawa Otane of raocow's talkhaus, and they are available for download in her site. She only translated the first three hacks.