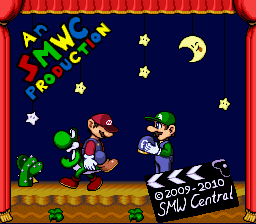 The collaboration first started in 2008 by the user "Buu" in a small thread that wasn't taken seriously. A forum was created behind the curtains with FirePheonix, Hach, and a few others being the only ones who knew about it's existence. The thread was closed by request of a user named "Electron" considering how pointless it was with the forums publically up in 2009. Further discussions were held in an IRC chat by the name #smwcp, and that was when FirePheonix took over leadership and developed the first stage. When the forum had died, pikaguy900 took charge to boost massive interest again, and that was when people filled the claims to create levels. This didn't last too long, as interest started to die down once again until the project was deserted for a while.

S.N.N., who claimed to once say "I don't believe SMWCP is going to go anywhere. Hacks like this always fail," somewhere during these times, recently saw the mass success of another major romhack collaboration "A Super Mario Thing" from raocow's talkhaus, and decided to become a major leader in the hack's development. Not only did levels finally get finished and claims being filled again, but he also helped compose tracks for the submaps and finished a few of the final level sublevels. A year later, the hack was finally finished and was released at the very end of 2010. 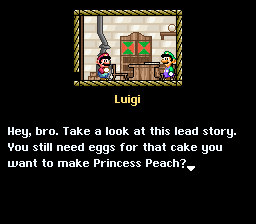 Mario and Luigi checks the calendar one day only to witness that it's Princess Peach's birthday. They realize that they have to bake a cake for her for once. The only ingredient they were missing was eggs, and Luigi coincidentally reports Bowser struck a dare against the brothers to take back 8 "Legendary" Eggs from his strongest army. Luigi is skeptical about the whole deal, but Mario runs straight past Luigi. And so, they're off! 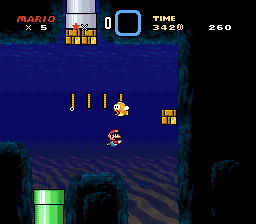 Flooded Crater, featuring an impressive Parallax background at the time.

When it first released, people were very excited to see how it turned out, as this was the work of many members of the community at the time. It turned out with a selection of custom composed tracks by S.N.N. among highlighting many ports in it's soundtrack. The levels brought many ideas to the table graphically, one particular instance being in Flooded Crater where the level implemented the Donkey Kong Country background from Aquatic Ambiance with the 3D effect in tact. All the enemies had a neat reskin to represent inside jokes from SMW Central at the time, much like "A Super Mario Thing" and the "VIP & WALL Mix" series. There was also an impressive amount of ASM put into it graphically, highlights including the transition effect and credits sequence. With the extended coin count, items could also be brought from the item shop. Every boss was also coded specifically for the game itself, each showing that SMW Hacking could do (including a Mode 7 fight that parodies Brutal Mario as the main game final boss with "Final Fantasy V - The Decisive Battle" playing). The story was also very interesting with a few twists and turns keeping the player interested in what's happening without being too dark. 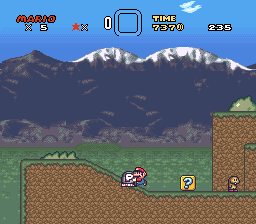 As time past, especially after raocow's let's play, the hack had not aged well. Several tropes the levels contained became infamous throughout the many stages in the game. The term "Item Baby Sitting" was born here, where puzzles relied on carrying items from one side of the stage to the other. Other issues including long levels with strict midpoints, heavy emphasis on puzzles, next-to-unfair difficulty for the good part of the second half, bosses being hard even at the first world, and many many more complaints. There is partly why development for the game's sequel has taken near a decade: the paranoia of it's sequel meeting the same fate as the first one. These problems are also the big reason why nobody remembers it fondly, as the newest posts on the Hack Release Page contains nothing but either trash talk or the hack not working on accurate emulators.

On May 2nd 2022, the sequel to An SMW Central Production releases (dropping the "An" in the process). Due to numerous delays and space issues, not all the assets made it to the final release. Despite that, many agree that it's better than the original.