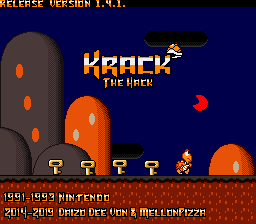 The title screen, featuring Krack being followed by 4 keys.

Krack The Hack is Daizo Dee Von and Mellonpizza's first big released project set in the Mushroom Kingdom: Beyond The Worlds franchise. First releasing during Winter C3, 2019 (January 4th, 2019), you play as Krack exploring non-linear levels, collecting a required amount of keys to end most of the 14 stages. It was voted "2nd Best Finished SMW Hack", and it's trailer was voted "2nd Best Trailer" during that C3, and ever since various updates have been made to further polish the game to it's current state. 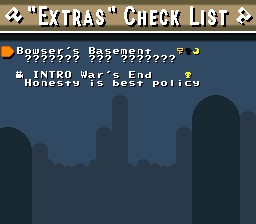 One of the biggest features: the Extras Check List after unlocking an achievement or passing King Bowser's Keep.

Many things stand out compared to most other ROM Hacks of Super Mario World, such as... 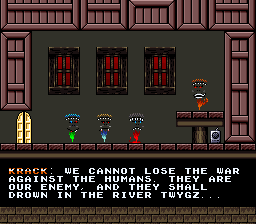 The game takes place in the outskirts of Mystical called "Konamina" where a near-extinct alien species called the Rixzos fight against the Mysticarian Empire as revenge for the Mushroom Kingdom framing them for a crime they did not commit. As Krack, the "Zaicron" leader of the Rixzos acting out one last battle with the humans, they find themselves near war's end. That is when the course of the Rixzo race changes forever. The Nemesis King Koopa, "Bowser", and his army barge in the middle of the battlefield, resulting in both the human soldiers evacuating and every Rixzo being captured in bottles.

Krack finds himself in a dungeon with a Koopa named Yanni, and that's where Krack learns about Bowser's ultimate plan of extracting the blood of every Rixzo to power a third galactic attack. Yanni offers a potion to transform Krack into a Koopa Troopa, but things aren't as kind as the potion causes permanent effects. Krack engages with a couple guards soon afterwards, and is asked a series of questions about himself. The adventure begins once the questionnaire is completed.

The staring character of the game with a British accent, originally a Zaicron Rixzo. His abilities don't change much from other SMW ROM Hacks besides some aesthetic changes (Mushrooms to Orange Shells, 1-ups to... the text "1-UP", and no Fire or Cape in sight). He usually either tells his enemies to "drown in the River Twygz!" or he calls them "Bent Roadkill Spoons". As a Rixzo, he leads the Rixzo army after another Rixzo name "Xander".

The "self insert" brother of Krack who is rescued at the end of the game. Considered the "Omega" of the Rixzo army, and is not looked up to by his peers. He knows how to fight, but will punch first and ask questions later. He is treated as his own character, separate from the author himself. He is the first to be kidnapped by Bowser himself.

The same Bowser Mario deals with in a daily basis, his main goal is to take out the plumbers once and for all. To do this, he has a dream of an unknown ancient relic called the "Dark Armour", telling of a master plan for Bowser to use the Rixzo energy to charge up a third galactic attack. Throughout the whole game he commands his men with Mac and Zac to hunt Krack down for dead. He almost succeeds in his plan until Krack inadvertently ruining his goal, and thus having to let his own castle blow up to smithereens. Nobody, not even his own soldiers know why Bowser is a shadow of his former self.

Based off of the same characters from Nintendrawer's "Super Mario Bros" series of comics, Mac and Zac are Bowser's third in command, filling in the role of Kamek whom is on vacation. Krack can encounter the two in various places, but mainly in King Bowser's Keep. They function as regular hammer bros from SMB3 except with two different shades of green. In the optional fights, they bring in another ally to help them take down Krack.

This robot character makes appearances in most of Daizo Dee Von's recent projects, and appears in the second postgame level Juxtapositionarian. His role is minor, but also significant as he seems to recognize Krack and fears he will tell Daizo about his existence. He basically acts like a "space" version of Kamek, being based on Kamek from Super Mario World 2: Yoshi's Island. This is the character's third appearance in a ROM Hack (others including The Mario Game, Law & Order: Mushroom Kingdom Unit Demo, and ALPHA SPHERE). 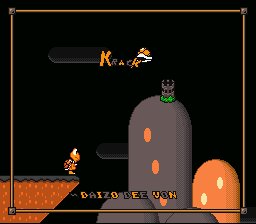 The first ever piece of development history that was remotely related to Krack The Hack was an upload by Daizo showing off ASM of a "Yoshi Coin Exit" levelasm where collecting 4 dragon coins acts like using a key and keyhole. Two years later, Krack The Hack was shown off in Daizo's Mushroom Kingdom: Expanded Universe thread, now restructured as "Mushroom Kingdom: Beyond The Worlds Franchise" with the second and third opening post being wiped in favor of holding all information in Post #1. It was to be released in 2017 before Daizo decided to work on the game longer and have Mellonpizza be on board for coding a lot of the unique touches the game brings (and working on a few of the levels). The delay was worth it, as in 2019 it became the "2nd Best Finished SMW Hack" in SMWC's Winter C3 2019.

During 2019, many fixes and patches were made to not only improve the game's aesthetics, but also to add in new or missing features. For instance, Krack The Hack couldn't actually be 100%'d until v1.1.2. came out due to a few achievements not working as intended. Some updates also include changing how some achievements worked to make them less specific such as Koopa See, Koopa Do and End One. The status bar even changed between versions for unknown reasons. When Doctor No approached Daizo and Mellon about a possible race, he asked for a simple mod of v1.3.0. to include infinite lives, and thus v1.3.0.R. was created and implemented later in v1.4.0. alongside sampled audio for cutscenes. The latest patch (v1.4.1.) to date fixes wrong warps and status bar bugs. The readme included with Krack The Hack goes into more detail with every change. 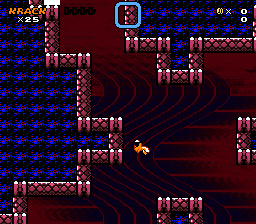 The unused second half from House of the Hollow.

Krack The Hack was featured as a mystery hack for Romhack Races, which showed off a special version of Krack The Hack referred to as "1.3.0.R" that enabled unlimited lives as opposed to starting the game with 25 lives. This was later added publicly as part of Speedrun Mode for v1.4.0. The winner of the race was Seathorne74 with 34 minutes and 16 seconds. More information can be found here under "Hacks and Mystery Races". You can watch the whole race here! 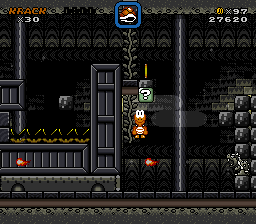 "Now why would this screenshot show Krack collecting this coin?"

The hack was very well praised with all it's unique features, and also with it's attention to detail like how the orange shell powerup stays in place and flips over if you hit a block on it's side. Almost every level is short, with a number of them coming up with a unique twist to the design of the levels including environment transitioning, styles of gameplay, to using a lot of mechanics found in SMW, and even changing the aesthetic style of the game for select levels. Even if it's just for looks, the biggest draw to the hack is the character Krack himself, and what it's like playing as a Koopa Troopa. The highlight of everyone's playthrough is when they reach the levels Cave-mine Corridors, King Bowser's Keep, and/or YUMPalovania.

The most divisive thing the hack brings is it's plot... more specifically, the long intro. The game's intro takes up 5 sublevels of many screens to attempt to tell a story that isn't immediately clear. On the one hand, it is a nice way to bring context to what Krack's goal is for the rest of the game, and for the unclear parts it brings a sense of mystery for players that pay attention. However, many streamers and let's players didn't appreciate how long the game took to start even with the skip button (which most of them miss and forget how to skip cutscenes later in the game). The intro only gets interesting for them once the questionnaire pops up. Most returning players/speedrunners also dread a singular stage: YUMPalovania. The level is based of the ROM hack YUMP by JUMP Team, and it was added in as the first special world stage of the game as a joke. The stage is basically an edit of Front Door from Super Mario World, but every numbered "room" is split far across and act as transitions to the added obstacles between, each with mechanics that are complete jank. The biggest saving grace is the multiple checkpoints, but that's quickly negated when the player realizes the achievement "one run runs in yump games" exists. At the very least, most people get a kick out of the level the first time they play it for the reference to YUMP alone, and the authors keep it in for that reason.

That being said, people also saw Krack The Hack as the big return to story driven ROM Hacks similar to Super Mario World: The Second Reality Project and The Devious Four Chronicles, and both Daizo Dee Von and Mellonpizza are happy they've achieved that.