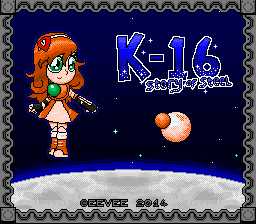 K-16 - Story of Steel is the second SMW ROM Hack created by Eevee developed in 2013 and finished in 2014, and serves as the second installment to the Sicari Franchise. The game is mostly known for being a complete overhaul ROM Hack that focuses on the player always being able to shoot a projectile in a similar vain to Mega Man with Super Mario World's physics.

Following the release of Sicari (the original), there was a fair bit of hype towards the release of K-16's very own game, especially with the different play style. The praise was indeed met when the ROM Hack was out, and presented a challenge that a number of people that appreciated it. The work in progress thread title says it for itself: it is "a hack that has nothing to do with Mario." 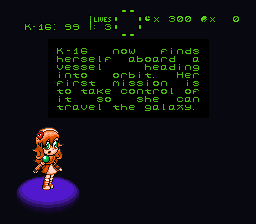 After the events of Sicari (or canonically, Sicari Remastered), Scarlet the Vampire swears on her brother to suck all sentient life into a self-made supermassive black hole using three space stations with the soul purpose of collecting energy from the power of stars. K-16 went after Scarlet into space, knowing that she's the only one who can stop her; the only one to save humanity. The game begins when she finds herself in a vessel that she overtakes in over to travel through the galaxy.

In this installment, the difference between Mario and K-16 are basically night and day. K-16 has a fixed walking speed that is in between normal walking and running, permanent projectiles, has a high jump when submerged under liquid, and also is able to walljump only once from one side of the wall. With an acorn, she wears a fox outfit that acts like the Super Mario Bros 3 Tanooki Suit, which sacrifices K-16's ability to fire lasers. You're able to switch back from using the fox tail without damage by using the fire-flower reskin which gives you a different palette. 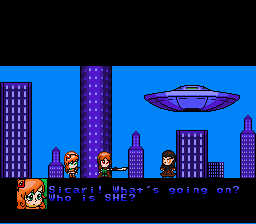 The scrapped opening cutscene, showing what Scarlet looked like during development.

It is worth noting that the K-16 Story of Steel thread was created the day after the release of the original Sicari, and has had an art style very similarly to it along with a big main overworld set in the emptiness of space, unlike the final game where there are four submaps. The story also had a different direction where originally the antagonist was meant to be a mysterious assassin who was unrevealed until possibly near the end, and K-16 would've been assisted by another human. It's good to point out that the assassin was still Scarlet since the image is called "Scarlet Appears!", though what she used to be was changed later. The K-16 player sprite has also changed a few times during development, originally having a much bigger head and progressively shrank as the hack moved forward in development until the final design on August 22nd, 2014. There are a few scrapped easter eggs and even pieces of levels that are still in the rom but unaccessable, such as... 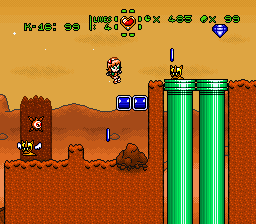 Planet Oreo, the second stage of the game.

The hack was praised for not only it's unique play style, but also it's art style each level provides, with every tileset and enemies all drawn/redrawn by Eevee. Others can agree the plot of the game is very interesting, even having a twist near the end about K-16 herself. The soundtrack has also been generally well liked by players for fitting almost every scenario the songs are used at, as well as being one of few romhacks that uses a few exclusive original SFX replacing some of SMW's to give it a different feel. It's also the first hack of the Sicari Franchise to have an exclusive custom boss fight not downloaded from SMW Central's Custom Sprites section, that being the battle against Scarlet herself in "The Final Battle". Even the setting opens up the concept of almost every level being it's own planet, along with levels and secrets that serve as world building.

A common shortcoming of the hack was it's very precise difficulty curve along with mechanics that aren't implemented well into the game itself, from making the shop redundant because of the coin cap only reaching 99 to enemy placement that requires waiting around before progressing. It was a Mega Man game by appearance, without taking what worked from it. Some people compared the difficulty to that of Mega Man & Bass, where the difficulty relies on patience trying enemies/obstacles, claustrophobic level design, enemies that are too fast to react, health starvation, and platforming that requires very precise and tight movement. Two of the bosses rely on being cheap, with Titan randomly hurting you when you bounce on him, and Mysteria being a reskin of a boss that isn't completely fit for K-16's move set. Some others are a fan of the difficulty, despite this.

For what it is going for, the hack stands out as one of the few SMW Hacks that uses a completely original character in a completely self-made universe and a unique moveset. K-16 returns in both Sicari Remastered and Sicari 2 - The Brink of Time as a main playable character alongside Sicari herself. Her character became so recognizable that she appears as a boss alongside Sicari in Super Wakana Land, and is also playable in the upcoming "Nightmare Edition" of 100 Rooms of Enemies.